Posted on September 1, 2016 by jlredford

Just this week a chip that I’ve been working on for the last couple of years finally came alive.   My colleagues put it on a board, loaded up the software, and it ran!   This was what the scene looked like:

[From “Young Frankenstein”.  It was so sad to lose Gene Wilder this week.]

Well, something like that.  It did flash some LEDs and print out some status messages as we huddled around it in a cubicle.  That meant that tens of millions of transistors had to work correctly, as did tens of thousands of lines of code.  It’s amazing that this stuff works at all, much less in the first days after power-up, but I have to admit that it wasn’t that spectacular.

First Display of the Telephone

Alexander Graham Bell achieved the first transmission of speech in March 1876, but couldn’t interest anyone in it.  He offered it to Western Union, who thought it was a toy. But his fiancé, Mabel Hubbard, knew what to do.  In June 1876 she secretly bought him a train ticket from Boston to the Centennial Exhibition in Philadelphia.   This was a massive world’s fair, showcasing the latest and greatest in technology.   The typewriter!  The mechanical calculator!  A slice of cable from the Brooklyn Bridge and the arm of the Statue of Liberty!

Mabel packed his bag and took him to the train station without telling him where he was going.  When she handed him the ticket, he protested, but she had already turned away.  Since she was completely deaf (they had met when he was teaching at a Boston school for the deaf), his complaints were of no avail.

He went to Philadelphia and stretched a wire from one end of the Education Hall to the other.  He again got no interest, until the last day of judging.   The emperor of Brazil, Don Pedro, was on the awards committee and recognized Bell from a tour of schools for the deaf.  He asked Bell what he doing at this machinery exhibition. Bell handed him a receiver and then went to the other end of the hall.  He recited Hamlet into the transmitter.  “My God, it speaks!” exclaimed the emperor.   That’s the reaction you want from demo visitors!

The telephone became the hit of the Exhibition, and Bell was on his way.  Thirteen years later he retired to his own supervillain lair, Beinn Bhreagh in Cape Breton, Nova Scotia to continue his astounding (but sadly not fiendish) experiments. 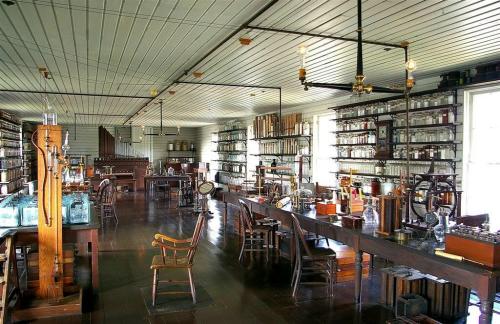 On New Year’s Eve 1879, Thomas Edison invited the public and press to Menlo Park, New Jersey to see his newly developed light bulb.   He and his crew had gotten it working three months earlier, but had only shown it to his investors and select journalists.   This was the big reveal.  He had 25 bulbs strung around the lab buildings and the street outside.  A huge crowd came out in the cold and snow.  Inside the lab itself, he showed a bulb burning while dunked in a glass jar of water.  You can’t do that with a candle, or a kerosene lantern, or a gas mantle, or a carbon arc lamp, or any other form of lighting in the previous history of the world.

The story was, well, electrifying.  It was on front pages around the world.  It was such an iconic moment, such a dividing line in history, that it has provoked a prolonged backlash against Edison.  People say that he wasn’t actually first, or that he stole other people’s ideas, or that he succeeded by brute-force trial and error.  Yet his bulbs were obviously better than others: they lasted longer because of better vacuums, were cheaper to install because they ran at a high voltage and so needed less copper, and were safer because he also invented fuses, switches, and circuit breakers.   He didn’t invent just a glowing wire; he created the entire system that made incandescent lighting practical.

His pride in it ultimately led to his downfall.  He got so wrapped up in defending his patents, particularly against George Westinghouse, that he got kicked out of his own company.  J. P. Morgan had invested in him to create the Edison General Electric company, but was disgusted by his distraction during the patent wars.  He replaced Edison as CEO with one Charles Coffin, who immediately renamed it General Electric, as it’s known to this day.

That story is nicely told in a new roman à clef, “Last Days of Night” by Graham Moore:

It follows Westinghouse’s young lawyer, Paul Cravath, in his attempt to beat off the wily and sinister Edison in the late 1880s.  It’s a ripping yarn, but kind of hard on the guy who genuinely was the Wizard of Menlo Park.

The Mother of All Demos

In 1968 Douglas Englebart presented a demo at an ACM meeting that prefigured most of computing for the next fifty years.  At that time computing was done with punch cards fed into big central machines.   Englebart showed:

This video is long, but shows more innovation per minute than anything I’ve ever seen.   I’m typing on the consequence of this work right now.   The ultimate value of this is literally in the trillions of dollars.

In 1979 Apple was already working on a big upgrade from the Apple II – the Lisa.  This would have a mouse, windows, and a graphics display.  Jobs knew that Xerox was way ahead of them in this style of interface.  They had built a machine like this, the Alto, years earlier.   He wanted to get Xerox’s tech, and get them to invest.   The execs at Xerox PARC knew that they could never build a machine as cheaply as the small, fast PC companies could, and hoped to collaborate.  They ordered the engineers to show the Apple crew everything.

Adele Goldberg, one of the authors of the graphics package Smalltalk, was furious about this.   Xerox was giving away the store before it even knew what it had.   She had to be directly ordered to give the demo.  She and a co-author, Daniel Ingalls, showed off the huge range of things Smalltalk could do: overlapping windows, education applications, an animation editor.  Michael Hiltzik describes what happened next in his book “Dealers of Lightning: Xerox PARC and the Dawn of the Computer Age” (1999):

At one point Jobs, watching some text scroll up the screen line by line in its normal fashion, remarked, “It would be nice if it moved smoothly, pixel by pixel, like paper.”

With Ingalls at the keyboard, that was like asking a New Orleans Jazz band to play “Limehouse Blues”. He clicked the mouse on a window displaying several lines of Smalltalk code, made a minor edit, and returned to the text.  Presto!  The scrolling was now continuous.

The Apple engineers’ eyes bulged in astonishment.  In any other system the programmer would have had to rewrite the code and recompile a huge block of the program, maybe even all of it.  The process might take hours.  Thanks to its object-oriented modularity, in Smalltalk such a modest changed never required the recompiling of more than ten or twenty lines, which could be done in second or two.

Jobs returned to Apple in a fury.   He had finally seen a system that would let his visions become instant reality.  The plans for Lisa were torn up, and the Macintosh was born.  Xerox got nothing out of it, except an eternal reputation as suckers.  Oddly, Jobs missed an even more important aspect of the Alto – that hundreds of them were wired together with a novel system called Ethernet.  Maybe that was because he cared mainly for the look of things, and not how they worked under the hood.

But it’s that under the hood stuff that my current project is demonstrating.  It won’t make emperors exclaim, or be in headlines around the world, or set the course of IT, or be the founding innovation of the world’s most valuable company, but we’re pretty proud of it.