One of the purest examples of maniacal engineering is the field of liquid rocket fuels.   These chemicals have to contain as much energy as possible, and so are  dangerous by definition.  A fun and opinionated version of their development has just been re-issued by Rutgers University Press: 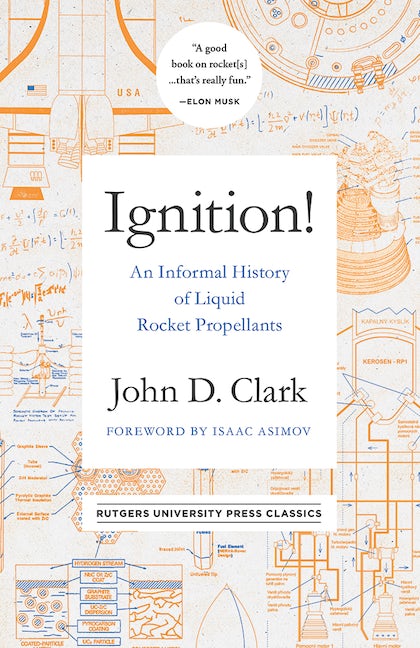 You know those hazardous material signs, the NFPS diamonds, that rate toxicity, flammability and explosiveness on a scale of 1 to 4? 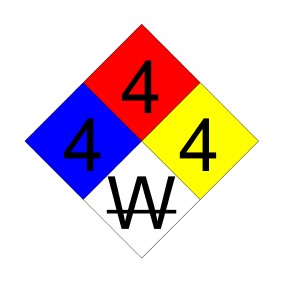 This is the sign for diborane (B2H6), and says it is maximally dangerous on every parameter.  The slashed W means it also reacts badly with water.  It turns out that it’s a fine rocket propellant!  That’s the sort of stuff these guys liked to work with.    If you see a building with such a sign on it, and it’s on fire, run.

Clark was the head of the Naval Air Rocket Test Station (NARTS) in New Jersey in the 1950s and 60s, and did a lot of the key propellant work himself.  He was also a friend and mentor to Isaac Asimov, and Asimov wrote an introduction for this book when it first came out in 1972.   Clark was also a serious SF fan going back to the 1930s.  He restored interest in Robert E. Howard’s Conan series by constructing a map and timeline of Conan’s adventures.

NARTS was trying to build rockets for the Navy.   They can’t use the obvious propellants, liquid hydrogen and liquid oxygen (H2-LOX).   Those are fine for big space launches (that’s what was in the big orange tank on the Shuttle), but take a long time to load into a rocket and can’t be stored on a ship because they boil away.  So the Navy wanted fuels that would:

By the later 1950s they had settled on a combination that is used to this day: UDMH (Unsymmetrical dimethylhydrazine, H2NN(CH3)2 , which is hydrazine (N2H4) with two methyl groups (CH3) tacked on) and RFNA (Red Fuming Nitric Acid, mostly nitric acid (HNO3) with a little dinitrogen tetraoxide (N2O4) for flavor).   If your job involves working regularly with something called Red Fuming Acid, you may want to consider a position in accounting.   Clark would test the mettle of interviewees at his lab by having someone drop a piece of a rubber glove into a beaker of RFNA:

The rubber would swell and squirm a moment, and then a magnificent rocket-like jet of flame would rise from the flask with appropriate hissing noises.  I could usually tell from the candidate’s demeanor whether he had the sort of nervous system desirable in a propellant chemist.

Both of these chemicals are nasty.   UDMH is a 4-3-1, highly carcinogenic and flammable.  RFNA dissolves everything – Clark got a permanent burn on his arm from one drop of it – and also breaks down into pure oxygen.  It took a lot of experimentation to discover that adding a little hydrofluoric acid (HF) will coat a steel or aluminum tank with a protective layer of fluoride and keep the RFNA from eating through it.

But they are liquid at room temperature and down to -54C, and do have good density (1.27, about four times that of H2-O2).  Unfortunately, they also have 3/4 the performance of H2-O2.  So their thoughts turned to an even stronger oxidizer, fluorine.

The easiest fluorine compound to handle is chlorine trifluoride (ClF3).  All those fluorine atoms love to strip electrons off of stuff.   When burned with hydrazine it gets about 6% more performance than UDMH + RFNA, and it’s 20% denser.  That’s nice, except that as Clark notes:

It is, of course, extremely toxic, but that’s the least of its problems.  It is hypergolic with every known fuel, and so rapidly hypergolic that no ignition delay has ever been measured.  It is also hypergolic with such things as cloth, wood, and test engineers, not to mention asbestos, sand, and water – with which it reacts explosively.

So naturally they experimented with it extensively.  They tried all sorts of fuels for it, and did get some success with mono-methyl-hydrazine (MMH) with various additives.   Better still was chlorine pentafluoride (ClF5), which has even more fluorine by weight.  It gets 13% more performance and is about the same density but needs to be kept cold and under pressure.   Even better still was dinitrogen tetrafluorine (N2F4), which is 21% better than UDMH-RFNA and still pretty dense.

They’re all highly toxic and flammable.  They also emit hydrofluoric acid (HF) after combustion.  With H2-LOX you get pretty clouds of condensing steam, and with these you get one of the most corrosive acids known.  It goes straight through your skin and damages your nerves and breaks down your bones.  So not only can you be killed by touching these fuels, and set your ship on fire when it’s spilled, but its HF exhaust destroys everything it touches.

So yes, the entire project was both dangerous and ridiculous.   Fortunately no one ever used it!    These days everyone uses pretty standard fuels like ethanol, methane, and kerosene, almost always with liquid oxygen.

Clark would not be surprised.   By 1972 he believed that his field was exhausted, that all the reasonable combinations had been tried, and he was pretty much right.   The only novel fuel I’ve seen recently is Propylene-LOX, which has more performance than kerosene and better density than methane, but is only a minor improvement.

Clark hoped that someone would find a way to make the ultimate fuel, mono-atomic hydrogen (bare hydrogen atoms), which would have more than twice the performance of H2-LOX when it reverted to H2. It would make single-stage-to-orbit rockets easy.  The SF author and editor John Campbell actually used this idea in his early novel The Black Star Passes (1930), and Clark knew Campbell through his SF connections.  People have reported making metallic hydrogen under gigantic pressure inside diamond anvils, but the results are still controversial and it almost certainly can’t be held in tanks.

So this crazy corner of engineering research is probably over.   The EPA is doubtless happy that it doesn’t have another Superfund site to worry about!

This entry was posted in Uncategorized and tagged mad-science, sf-ish, space-ish. Bookmark the permalink.