It being officially spring (albeit with so much rain that even the ducks get depressed), I broke out the bike and bopped around a bit.  There’s a nice rail trail near me (the Minuteman Bikeway) that covers about 2/3 of the way to work, so I often commute that way in the summer.  Google’s new bike map option actually showed me a route I didn’t know about, thus showing how AI is creeping into our lives.  It won’t be long  before the Googleplex figures out the nuclear launch codes, so it’s a good thing they’re officially not evil.

It’s about a ten-mile bike ride as compared to a twelve-mile commute by car.  Is that worth it in greenhouse terms?  The car drive takes about half a gallon of gas, or about 60 Mjoules.  Bike riding is said to take about 400 Kcalories/hour, and the ride takes 45 minutes, so that’s 300 Kcalories, or 1.3 Mjoules.  That’s 45X less energy!  Bikes rule!  In straight energy terms 300 Kcalories is the energy in about 1/100 of a gallon of gas, so on my 10 mile ride I’m effectively getting 1000 miles/gallon.  Beat that Toyota!

This isn’t too surprising when you consider that my car weighs about 15X what my bike and I weigh.  It goes about 3X faster on average (40 mph vs 13), so 15X * 3X = 45X the power needed.  That’s suspiciously close, actually.

Unfortunately, it takes fossil fuel to make food.   I haven’t seen a clear breakdown of where it goes, but most of the claims refer to this study by Prof David Pimentel of Cornell.  The claim is that it takes  7 to 10 calories of fossil fuel to produce each calorie of food.   Each of the major steps – fertilize, harvest, package, ship, and refrigerate – takes its share, with fertilizer being the largest piece.   Growing organically and buying locally helps, but it’s still going to be a few calories in per calorie out.

So those 300 Kcal of bike effort really represent more like 2000 Kcal of gasoline.  That drops my effective mpg from 1000 down to ~150.  Still pretty good, but within striking distance of a Lovins-style hypercar.

My own bike, from the sadly defunct Bike-E company

Will ultimately lose to this: 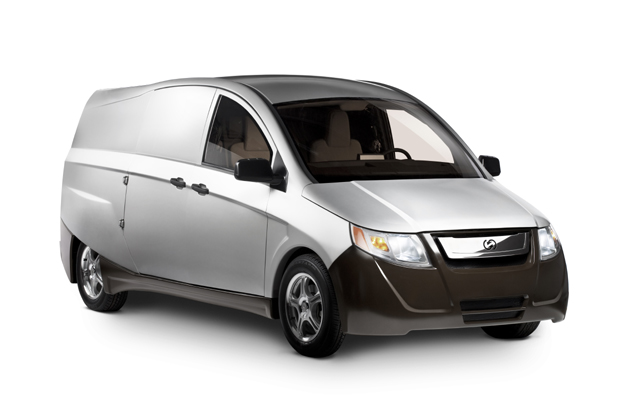