Space Is Not That Big

So we just had the 50th anniversary of Apollo 11, and there’s renewed interest in doing another landing on the Moon.  That got me thinking about space as the final frontier. How much is there out there really?  I added up the area of the all the places in space that we could ever reasonably land on, and found that there’s just not that much of it.  There’s actually less area in the solar system than there is on Earth itself.  Here are all the habitable places in the system drawn to scale: 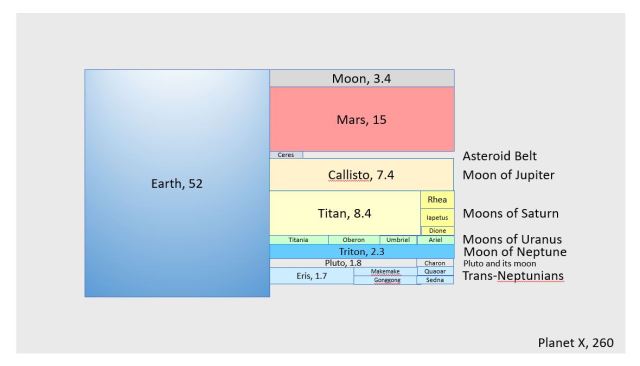 The units are in the area of the USA, just to pick something people might be familiar with. One USA (including Alaska) is about 10 million km2.  All of the Earth is only 52 times the area of the US.  The other bodies are in order of distance: the Moon is 1/15 the area of the Earth and Mars about 1/3.  Then there’s tiny little Ceres at 0.3 USAs, then the big moons of the gas giants, and finally Pluto and all the oddly named iceballs that have been discovered in the last 20 years. The total is 48 USAs spread over 23 bodies.

What’s not here?  The gas giants Jupiter, Saturn, Uranus, and Neptune are out because they may not even have surfaces.  People talk vaguely of floating cities in their atmospheres, but there’s nothing to build them out of, and there are winds of over 1000 km/hour.  Forget Venus because even robots last only a few minutes under 90 atmospheres of CO2 and sulfuric acid, and temperatures of 480 C.   Mercury and the inner moons of Jupiter and Saturn are out because their radiation levels would kill you in a day.  On Jupiter’s moon Io the radiation would kill you in minutes, except that you would already be dissolved in molten sulfur.   Titan is shown, but is actually a marginal case, since its dense, cold atmosphere of nitrogen and methane is probably lethal, and certainly dark and dismal.  There are lots of tiny asteroids, but collectively they don’t add up to much.  There are lots of planets around other stars, but no one knows how to send even a probe to the closest one, Proxima Centauri b, much less send a probe that can stop, much less send a ship with people.

Calling any of these places habitable is already generous, of course.  Every square foot of the Earth is more habitable than any square foot outside of it.  The bottom of the Marianas Trench still has water, organics, proper gravity, radiation shielding and a biome, and that’s missing from everywhere else.

But note that there’s one other body on the picture above – Planet X.  No one has seen it, but there appears to be something that’s perturbing the other bodies way beyond Neptune.  It’s thought to be 5 to 10 times the mass of the Earth, and may be a fifth gas giant that was ejected from the solar system early in its formation.  It would be 20 times as far out as Neptune with an orbit tens of thousands of years long.  If it really had a surface, and if its density was such that the gravity was 1 G, then it would be a bit over twice the diameter of the Earth, and at least 5 times its area.

That would be something worth settling!   Light it with fusion-powered stars in orbit, sail its liquid nitrogen seas in boats with vacuum-insulated hulls, and seed its continents with warm-blooded Dyson trees,   Spread out under its dark star-lit skies like the first Elves in Middle Earth before the Sun arose.  It’s space colonization’s greatest hope!  Let’s put Duck Dodgers right on it: 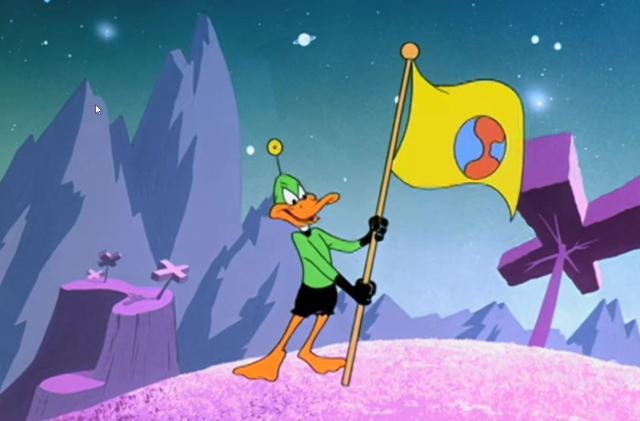 This entry was posted in Uncategorized and tagged space-ish. Bookmark the permalink.

1 Response to Space Is Not That Big