“The Earth After Us” – Humanity in Deep Time

So I was once sitting in an introductory geology class, and the instructor was talking about limestone.  “It’s sometimes formed by calcium carbonate precipitating directly out of seawater,” he said, “Until life evolved 600 million years ago, and it then became largely made of skeletons.”  Six hundred million years – yesterday, really, to a geologist.  You look at this layer and there was no life, and in this layer there is.   You can see the difference in the rock’s fine structure.  The field has an effortless sense of the vast scale of time. 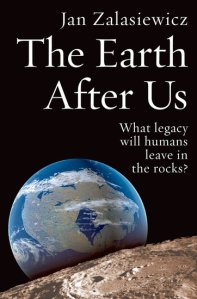 So when the geologist Jan Zalasiewicz started thinking about what humanity would leave behind after its inevitable disappearance, he wasn’t thinking about the next century or next millennium.   That got covered nicely in The World Without Us by Alan Weisman (2007), who found that Nature comes back fast and hard in places where people can’t go, like the Korean DMZ and Chernobyl.    Zalasiewicz  wondered about a bigger picture.  Suppose that aliens landed in a hundred million years.   What could they learn about us?

It’s a good excuse to talk about geological processes in general, particularly his own specialty, stratigraphy.  He noted that most of the crust of the earth is made of rotted rocks, ones that have been broken to bits, laid down in sediments, and then cycled up and down by tectonics, sometimes multiple times.  This means that nothing of ours that’s inland will survive.   All inland cities will be eroded down to nothing by wind and water.   Higher latitude ones will be ground into sand by glaciers.   Boston and New York certainly won’t make it, since their locations have already been planed down by several rounds of Ice Ages.

The only remnants likely to survive will be ones that are built on river deltas, since they’ll get buried in sediment as the sea rises.  These are cities like New Orleans, Shanghai, and Venice.    New Orleans is below the level of the Mississippi already, and is likely to be all that ever remains of America.  It’s important that things get buried quickly before wave action turns them into beach sand and spreads them over the sea floor. It’s these former swamps where paleontologists find skeletons today, not the uplands where the dinosaur herds used to graze. 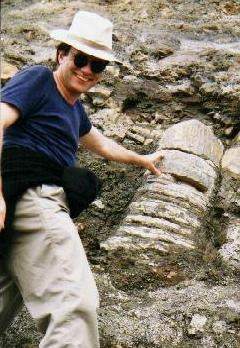 I visited one of these sites myself at the Joggins Fossil Cliffs in Nova Scotia.   This was a swamp that got buried in a sudden mud flow 310 million years ago, in the early Carboniferous.  It happened so suddenly that a complete skeleton of an early reptile, Hylonomus Lyelli, was found in a hollowed out trunk.  Oxygen levels were much higher then, and arthropods grew to enormous size; there’s a millipede track there that’s a foot wide.   Those trees made the area a coal mining center until the 1950s when a decline in demand and several disasters closed the mines.

Cities that do get buried in this way will form what he calls an Urban Stratum, a smashed mix of concrete and rusted-away rebar.   For each person in the developed world, about 500 tons of  sand, gravel, limestone, brick clay, and asphalt is used in the course of that person’s lifetime.   We each leave a lot more behind than a ten-ton dinosaur!  Other organic material like plastics and wood in this stratum will get cooked into oil.   Things like pure aluminum are never found in nature, but will occur here.

There will be other, larger traces of our presence.   There is an ongoing die-off of coral reefs, which themselves can form undersea mountains called carbonate platforms.  There has been a sudden disappearance of large mammals over most of the earth.  More distinctively, species that used to be found on only one continent, like rats, are now everywhere, causing a large loss in species diversity.   There’s a nice phrase for this, “Planet of Weeds”, where the species that are the most adaptable and fastest-growing are taking over.

Our own bones won’t leave as much of a record.   The dinosaur age lasted a hundred million years and we still don’t find that many.  He does estimate that the total living mass of humanity is now similar to that of the dinosaurs in the Jurassic.  Bodies in wooden coffins won’t last, but stone ones buried without oxygen might.   He notes that gangsters in concrete overcoats dropped into the Hudson have a good chance of survival, complete with impressions of spats and fedoras.

Nothing of human culture would remain – all art and books and electronic media will be lost.  About the most that the alien paleontologists could infer is that humans took care of their own, since there would be elderly skeletons with healed fractures.  On the other hand, many of the bodies we do find are victims of violence, like the 5300-year old Otzi, who had an arrow in his shoulder and a skull fracture, or the 9000-year old La Brea Woman from the tar pits, who had part of her skull missing.  Bodies found in obscure places generally did not die peacefully.

Zalasiewicz is actually the chair of the Working Group of the Anthropocene, part of the International Commission on Stratigraphy.   In August 2016 they voted to officially recommend it as the name of a new geological age.  They think that it’s most distinctive marker are the radioactive elements dispersed by atmospheric nuclear testing.   This only lasted from 1945 to 1980, but spread carbon-14 and plutonium over the whole world, a phenomenon now known as the Bomb Pulse.   It’s actually a useful marker for determining the age of trees and bones.   The half-life of these elements is short in geological terms, but the decay products are distinctive.

One thing that Zalasiewicz does not talk about is ruins left in space, since that’s outside the purview of geology.   Satellites below about 2000 km will eventually decay into the atmosphere, but ones at geosynchronous orbits will be there forever, although they’ll drift into stable longitudinal locations above 75E and 105W.   There is also a fair amount of debris on the Moon – 46 missions have impacted there.   The rate has been low in recent decades because The Moon is Dull.   There actually is erosion on the Moon due to a steady rain of micro-meteroites, but I don’t think anyone knows if that will wear away stuff like the large Apollo artifacts over geological spans of time.

The other thing he doesn’t talk about is what actually happens to humanity.  It’s clear that we can’t go on living as we have been – the earth won’t support it.  Yet there’s no telling what a stable, sustainable human culture would look like, since there’s never been one.   Even the nature-loving Indians changed the whole Midwest from forest to prairie by means of fire.  We could go extinct, of course, but that would be a boring outcome, and pretty unlikely given how tough we now are.  We could now survive even the dinosaur-killer asteroid by stockpiling canned food in caverns.   One stable outcome would be to split into multiple species that become a predator-prey ecosystem like that of the Morlocks and Eloi in Wells’ The Time Machine.   Another would be to cycle endlessly between pastoral and industrial modes like Pournelle and Niven’s aliens in The Mote in God’s Eye.  They’ve been technological for so long that they’ve evolved an instinctual understanding of machinery, and go from hunter-gathering to nuclear war every five hundred years.

Science fiction is full of other ideas, but the bottom line is that we aren’t going to be here over the spans of time that geologists work on.  We’ll be just another unusual episode in the long and bizarre history of the earth.   Here the limestone came from seawater, here it came from diatom skeletons, and in this narrow layer it came from concrete.    It’ll be just one more oddity that the geologists deal with, like so many others.