I was standing in the SF section of a bookstore the other day, looking at the anthology shelves.   Of the 74 short story collections they had there, 7 were based on H. P. Lovecraft’s Cthuhlu Mythos.   “The New Cthuhlu”, “Shadows Over Innsmouth”, “Future Lovecraft”, etc.  10% of active anthologies are based on the work of a writer who died in 1937, almost 80 years ago.   In the novel shelves, he had 16″ worth of space, more than Heinlein or Asimov.   He was still behind his contemporary Tolkien (40″) and way behind the biggest genre author today, George R. R. Martin (100″), but that’s still a lot of attention for a guy who only had one book published in his lifetime. 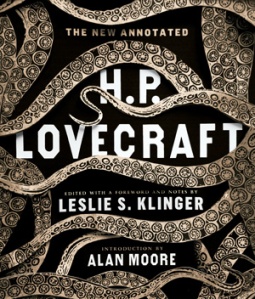 Being in a Halloween frame of mind, I picked up a massive volume there: “The New Annotated H. P. Lovecraft”,  edited by Leslie S Springer.   It covers the 22 Arkham stories out of his 70 published works, including “At The Mountains of Madness”, “The Color Out of Space”, “The Call of Cthuhlu”, and my favorite, “The Shadow Out of Time”.  Each story has a sidebar that expands on obscure references, and there are appendices on subjects like the faculty of Miskatonic University, HPL’s notes on the Necronomicon, and the 30 or so films that are based on his work.   The whole is beautifully printed and bound.  Jonathan Franzen would kill to get such an edition.

So why all this attention?  In his introduction, Alan Moore thinks it’s because Lovecraft’s racism, misogyny, and anti-Semitism made him just an ordinary white guy in the modernizing America of the 20s and 30s.  What?  Do ordinary white guys die of malnutrition because they’re too proud and nervous to hold a job?  Do anti-Semitic misogynists marry Jewish women?  Moore does, however, do a nice pastiche of Lovecraft’s convoluted and near-impenetrable writing style.

No, it’s not the fear of immigration by degenerate Others that prompts the present-day interest.   I think it’s more Lovecraft’s sense of the vastness of the universe and our insignificance within it.

Take a prolific modern admirer of his, Charles Stross.   He wrote a brilliant update of Lovecraft in “A Colder War” (1997), where the US and Soviet Union make a secret agreement to hide the discoveries made by the Pabodie Expedition to Antarctica in 1931.   Now it’s the 1980s, and there’s conclusive evidence that the Soviets have used weaponized shuggoths in Afghanistan.  Worse still, they found something at the bottom of the Baltic, something they barely contained in an enormous concrete pyramid.  There’s a wing of US nuclear ramjet cruise missiles pointed at it, and they’re not sure that 300 megatons will be enough when it wakes up.

That story was straight-up horror, but Stross has also written an entire comic series, the Laundry novels, about a hapless IT guy drafted into Her Majesty’s Occult Service.  It turns out that magic is a branch of mathematics, a branch that allows you to communicate with creatures from other planes.  They can do wonderful things for you before they seize your brain’s BIOS.  Our hero travels around the world dealing with such incursions, and praying against the day when the Old Ones finally notice humanity.

For Stross and other modern writers, Lovecraft is interesting because he knew that the universe was huge and ancient, and therefore filled with huge, ancient sentients, intelligences vast and cool and unsympathetic.  We’re crawling around on this one rock beneath this thin skin of air, while they’ve been out there for billions of years.

This cosmic dread is the SF version of the general feeling of doom that pervades our culture.   Here we are, as happy and successful as humanity has ever been, and literature is full of disaster and dystopia.   Young adult books are nothing but.  Everyone seems to be waiting for the axe to fall.  There must be a German word for this!  Everyone is as anxious as that lost and lonely man in Providence, looking up at the sky in terror instead of wonder.    He was a crank and a failure, but he was onto something that resonates today.

This entry was posted in Uncategorized and tagged sf-ish. Bookmark the permalink.