Posted on September 8, 2014 by jlredford

Here’s one of the most frightening charts in all of science:

CO2 has risen by a quarter just in my lifetime, and we all know the consequences.

The chart comes from a remarkably sustained effort by Charles David Keeling:

and his son Ralph:

who were/are professors  at UCSD.  The elder Keeling was experimenting with measuring CO2 in the 1950s, and found that he couldn’t get consistent results when he took measurements around California.   He needed to get someplace where the natural greenery didn’t vary randomly.   A friend at the US Weather Service suggested the slopes of the massive volcano on Hawaii’s Big Island, where they had just put a new weather station.   The high winds there mean that the CO2 is nicely mixed from all of the Pacific.   Keeling set up his instruments during IGY in 1958, and tended them until his death in 2005.  His son took over early on, and has kept the series going.   It’s unheard of to run a single experiment for almost 60 years.  Here’s what it actually looks like: 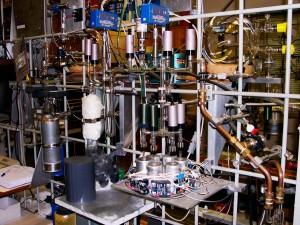 CO2 Extraction rack. CO2 level is measured by shining an IR light through a tube of test gas and a reference tube, and measuring the difference in absorption

The whole Scripps CO2 Program is measuring levels at 11 other places besides Mauna Loa, and is also measuring atmospheric O2 levels, and seawater CO2 levels.

So you’d think that a program that is giving such an important data for so long would be securely funded.  Ha.  The Keelings have always had trouble maintaining the grants for the work.  In the 1980s it almost shut down as part of a bureaucratic squabble between NOAA, the NSF, and the DOE.  Everyone thought this was naturally under NOAA’s purview, but they didn’t have the money.   In the larger view, it has had problems because it’s not providing new results; it’s  just tracking the oncoming disaster.

Yet they have recently had a much worse time of it.  Several grants had ended.  The GOP has gotten much more rigid in opposing climate change.  In North Carolina the legislature actually passed a law forbidding the use of climate science in estimating sea level rise, since it gave an answer, a 1 meter rise by 2100, that coastal developers didn’t like.  The GOP also insisted on 8% cuts across all federal agencies as part of their Budget Sequestration bill of 2013.

So in December 2013, Ralph Keeling sent out a general appeal for public funding.   He hoped that interested citizens could do what the paralyzed federal government could not.   Here’s the actual appeal page:

I chipped in $500.  Unfortunately, UCSD isn’t really up on this whole crowd-sourcing thing.   They refuse to install a PayPal button, saying that it’s not secure enough.    They don’t offer any tchotchkes for supporters, unlike Kickstarter.   I decided to remedy that, and made up my own coffee mug on Zazzle: 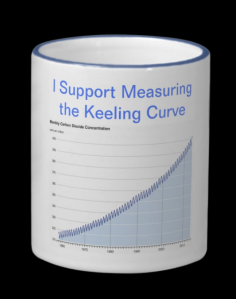 If you email me a proof of donation, I’ll send one to you!  They’re handsome 11 oz mugs.

The campaign has gone both badly and well.  Badly, because they’ve only raised about $20,000 from small donations.   The ALS Ice Bucket challenge raised that much every ten minutes last August.  It’s gone well because they recently landed a big fish: the Wendy and Eric Schmidt Foundation.   That’s Schmidt as in Google.   They agreed to give $500,000 over five years.  The total burn rate of the Scripps CO2 Center is about $1M per year, so this helps a lot, but cannot be the only funding.

How crazy is it that key science has to be supported by such a volatile method as public funding appeals?  Sure, you’re paying for bad news, but that’s the kind you should most want to hear.  It’s the kind that should get general social support in the form of government funding.   James Conant and Vannevar Bush, founders of the NSF and of Big Science in general, would be spinning in their graves.

This entry was posted in Uncategorized and tagged political-ish, tech-culture. Bookmark the permalink.

6 Responses to Paying for Bad News: Funding the Keeling Curve