Peak Tragedy Is Long Past…

… at least in the US.   By peak tragedy I mean a year in which the maximum number of young people died.   It’s sad when old people die, but it’s tragic when the young are taken.  They lose decades of vital and active life, whereas the old are losing years of reduced and often painful existence.

So here’s an extraordinary thing – the answer is no.   The absolute number of young people dying has gone down every decade since 1900:

From “Historical Statistics of the United States”
Click for spreadsheet 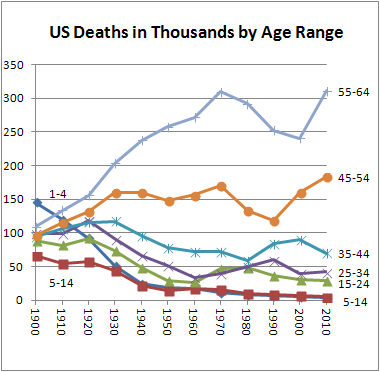 The greatest improvement was because of the great decline in 1-4 and 5-14 mortality.  Those have dropped from 210K to 9K!  Yet deaths in other young ranges have declined too.   The number of deaths at higher age ranges is finally rising in the last few decades because of the huge population increase, and this would be even more apparent if I included deaths over 65.  Those so outweigh the other ages, though, that the chart can’t be read.   In 2010 over 70% of all deaths are of people over 65.

Still, this is an extraordinary accomplishment.   By this most fundamental measure, life is better now than ever.   At a time when the US is the third most populous country in the world, fewer people than ever are dying for stupid reasons.

Yet the present era seems fascinated by doom.  Books and movies are filled with apocalypse, as is political rhetoric.   Even though the old doom of nuclear war has receded (see last post), the new doom of climate change (in post before that!) is coming on fast.  That still seems too abstract to account for this attitude, though.

It could be just because the US has hit a rough patch in recent years.  It just lost two wars and had a lot of its money stolen by Wall Street. The criminals behind all of those losses are still at large.   Unemployment has been high for five years now, and is not improving.  No one in politics is addressing any of that, or much of anything else for that matter, so people have little hope of progress.  Even at a time of tremendous absolute levels of health, people can still feel grim.

This entry was posted in Uncategorized and tagged people-and-numbers. Bookmark the permalink.