What I Wanted To Be When I Grew Up

Actual photograph of the engineers Alfred Kunen and Milton Minneman looking at an ion rocket engine. Ad for Republic Aviation from Aviation Week, 1959

Well, this isn’t literally what I wanted to be, since I wasn’t reading magazines like this in 1959, or at all, actually. But this sense of the mysterious and awesome work that was happening right now in labs all over the country was something that very much informed my childhood in the 60s.    A picture like this would have been a painting  in any earlier decade, but by then it was a photograph.  I could be one of those Men in Black, peering at a device which would fly people to Mars.   Note how they included a shot of the entirely mundane office building where the work happened.  It was actually a recruiting ad, so they wanted to reassure people that this was a real job. 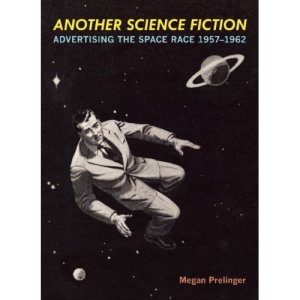 This image came from “Another Science Fiction – Advertising the Space Race 1957 – 1962” (2010) by Megan Prelinger, which was a birthday gift from my brother.  Prelinger is also the keeper of the fascinating Prelinger Library in San Francisco, an open-stack private library meant to encourage the finding of connections.  She has dug through old aviation magazines and found a treasure trove of space imagery.  The whole country was in a post-Sputnik dream of the Final Frontier.  All these images from the id of science fiction popped up in corporate advertising.  There was a huge push on to develop ICBMs for the Cold War, and they sweetened the job descriptions with the promise of space exploration.  You wouldn’t be contributing to the fiery destruction of civilization – you would be pushing humanity out to the stars.

This particular picture is touting a research project into one flavor of ion thruster rockets.  These use an ionized gas driven by electrical and magnetic fields to get a lot of momentum change from very little fuel.    They’ve been used on 7 space missions so far, including the Dawn mission to Vesta and Ceres, and the Hayabusa asteroid sample return mission.

The pinch plasma engine was an initiative of Republic Aviation, sponsored in part by the navy and the air force.  In pinch plasma propulsion, a neutral mix of ions and electrons is suspended in a gas.  Plasma propulsion “utilizes the magnetic acceleration of a plasma to eject particles from a space vehicle.”  The result is propulsion with low thrust and high specific impulse.  The “pinch” chamber confines the gas as well as the electrical current that is released into the gas by an electrical charge.  The charge ionizes and heats the gas, creating a shock wave and pressure buildup inside the “pinch” chamber, which ejects the gas at 1.8 pounds of thrust.

The patent describing this scheme is 3,091,079 “Propulsion Engine with Electromagnetic Means To Produce Propellant Acceleration”.  Unfortunately, current work in ion thrusters doesn’t appear to have gone this route.  Almost all of the projects described in the book came to nothing, largely because Apollo sucked away the research money for anything exotic in space.

Of the people in the picture, Alfred Kunen doesn’t appear to have left a trace on the Internet, except for the above patent and a previous one for an air conditioning scheme.

Milton Minneman is still around at age 87.  He only retired from the DoD in 2004 at age 80, and has just gotten his 6th college degree, a master’s in IT.   Here‘s an article about him in the Maryland Gazette.  The article mentions that he worked on troop transport, but some Googling revealed that he was involved with earth-penetrating nuclear weapons.    This was a particular interest of Dick Cheney and Donald Rumsfeld, who wanted to use them to get at deeply buried Iranian and North Korean bunkers.

Maybe that’s what happens to the dreams of wannabe wizards.  You start out wanting to fly to Mars and end up doing crazed Strangelove-ian military projects.    That’s where the money is.   There was only money for flying to Mars as a side-effect of the Cold-War-driven Space Race.  Once that race was won with Apollo, the space dreams evaporated.

Or rather, the absurd space dreams evaporated.   As I’ve written about before, there is lots of genuine space science being done today.    Ion engines are really in use.   Today’s wizards don’t wear black suits and narrow ties, but they’re doing work just as amazing.