The Robot Population of Deep Space

In 1978 I heard Carl Sagan speak at MIT.   The two most important space probes ever, Voyager 1 and 2, had just launched the year before, and  Sagan had been deeply involved with them.  It was his idea to do the Golden Voyager Records , the gold-plated phonograph disks that held hundreds of sounds of the Earth.  He said in his lecture (quoting from memory):

Right now is the golden age of planetary astronomy.  Twenty years ago we weren’t able to do anything but look up at them through an ocean of air.  Twenty years from now they’ll be fully explored.   This is the time to get involved.

That’s pretty direct advice from a professor to students!  Unfortunately, the timing of it was bad.   The Voyagers were the last gasp of the Apollo-era US space programs.   There were two more US launches in 1978, of the Pioneer Venus probes, and then nothing until the Galileo Jupiter orbiter in 1989, an 11 year gap.

The main problem was Shuttle cost overruns.   It was already in trouble in the late 70s, and it only got worse.   That sucked up most of NASA’s money.  When Reagan was elected in 1980, his administration also had little use for space science.   Those people wouldn’t vote for him anyway.  He preferred to spend space money on the Pentagon, which would both scare the Reds and give tens of billions to his campaign contributors. 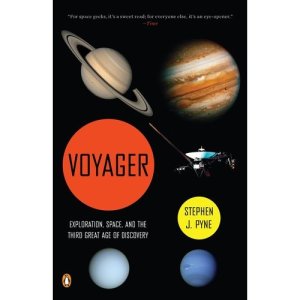 In Stephen J. Pyne’s recent book, “Voyager: Exploration, Space, and the Third Great Age of Discovery”, he also believes that the Voyagers were a never-to-be-exceeded peak of space exploration.   He thinks that there was a huge exploration phase in the 20th century, starting in the 50s with the explorations of Antarctica and the seafloor,  culminating in Voyager, and declining since.   He compares it to what he calls the First Great Age of exploration, the discovery of the route to India and the New World between 1450 and 1550, and the Second Great Age from 1750 to 1850, the age of Cook, Humboldt, and Darwin.  His comparisons seem rather forced, but it’s clear that the exploratory impulse has waxed and waned over the centuries.

And it does actually look as if the US space program is in deep trouble.  The Shuttle just retired, and nothing is replacing it.   The most productive scientific instrument of all time, the Hubble, is nearing the end of its operational life, and its replacement, the James Webb Space Telescope, is close to being cancelled.

So I decided to look for myself at how space science activity has increased and decreased over the 50-odd years of the Space Age.   How many robots have been operating in deep space by year?  I took this List of Interplanetary Voyages  and plotted where and when the 59 successful probes have flown:

The 80s really were a sparse time, with just some Russian probes to Venus and two Japanese probes to the asteroids.  Then things picked up in the late 90s, and really got active in the Zips.    Right now there are 15 active deep space probes:

So there’s actually a lot going on.  In fact, it’s one of the most active times for planetary science yet, with Messenger and Dawn achieving their orbits just this year.  Another NASA mission is due to launch this year the Curiosity Mars rover.  The ESA and Russia are also planning Mars missions soon.  The Chinese have put two probes in orbit around the Moon, and are also looking at Mars in 2013.

So it looks to me as though Pyne’s Third Age of Exploration is going pretty strong.    Sagan had it wrong – there’s plenty still to be discovered about the solar system 33 years after his lecture.  That would have delighted him, actually.   A student who had heeded his advice in 1978 would have had a tough first 15 years, but would have plenty to do today.

This entry was posted in Uncategorized and tagged big-tech, space-ish. Bookmark the permalink.

5 Responses to The Robot Population of Deep Space