“What will be the next big technology?” is a question that gets constantly asked.   The answers are usually boring: smaller and more prevalent computers, some new energy source, some advance in space tech, or maybe something will finally happen with AI.

Yet there’s a different trend that holds more interest.  As time goes on, more and more complex subjects can be understood and handled.   By complex I mean subjects that need concentrated and theoretical study, not just empirical tinkering.   All technology was empirical until the 19th century.   Then people started to use real physics – theories of heat, motion, and light – in their engines and electrical equipment.   By the 20th century we advanced to the much more complex fields of chemistry (plastics, semiconductors) and biology (medicines that were at last effective, serious crop breeding).

So now in the 21st century we’re coming up on understanding really difficult areas like psychology and sociology.   These are far harder to do experiments on, and contain such a mixture of underlying causes that teasing them apart is far trickier. 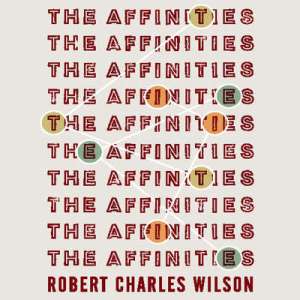 Which brings us to Robert Charles Wilson‘s new SF novel, “Affinities”.   He’s had a long and solid career, and won the Hugo for his novel “Spin” in 2005.  Here he proposes that in the near future scientists will actually understand what makes people trust and cooperate with each other.  They found a company, InterAlia, that puts candidates through a series of psychological and genetic tests to find out what group, or affinity, they belong to.  There are said to be 22 such natural groupings, which cover about 60% of the population.   Once they find out yours, they assign you to a weekly meeting of your affinity.  You pay for the testing and then an annual subscription fee.

The protagonist, Adam, comes from a quite dysfunctional family.  His father despises him as a weakling, and favors his jock older brother.   He won’t cover the cost of college for Adam’s artistic ambitions, but his grandmother sneaks him the money and he moves away to attend school in Toronto.   He’s rather lost and lonely in the strange city, and so signs up with InterAlia.

Meanwhile his beloved grandmother falls sick.   His father gets power of attorney and immediately cuts him off, saying the money is needed for her medical expenses.    He returns to Toronto, but doesn’t know what to do now that he can’t afford school or even an apartment.

In this state of anger and anxiety he attends the first meeting of his affinity.  There’s an instant connection.  Finally, people who understand him!   He has found his tribe.   One of them knows another member who has a graphic design firm downtown, and needs an assistant.    There’s always a spare room where he can stay.  A girl with dark hair and deep eyes takes an immediate interest in him.   In the course of an evening he finds a job, a house, and a romance.

His particular affinity is called Tau, and covers the casual and creative types.  Others prefer more hierarchy and discipline.   InterAlia’s system is like a Big Data version of Myers-Briggs personality type indicator, where instead of the rather arbitrary axes of feeling/thinking, introversion/extroversion, intuition/sensing, and perception/judging, the categories are extracted from data on millions of individuals.

Tau is one of the largest and most energetic groups.   They soon organize their own insurance programs for their members, and then pension plans.    Need help with an abusive boyfriend?   Your fellow Taus can figure out a way to keep him away from you, with the help of a Tau cop.   Need to set something up in a new city?   The local Taus are ready to help because they trust you, and know just where to find what you need and who to deal with.

A social mechanism like this is far more important than a new widget.  Almost anything worth doing needs the cooperation of a large group of people.   Maintaining a common purpose among factions gets harder and harder as the group grows and ages.  Institutions that can overcome the natural divisions among people can take over the world.   The Church.  The university.  The joint-stock company.   The parliament.

All of these have been worked out empirically, and look creaky today.   What if there were a real theory behind these social inventions?   What if they could be tuned up in a systematic and optimum way?   You would go from hand-tweaked steam engines to engineered gas turbines, from locomotives to jets.

In the novel, this naturally goes wrong pretty quickly.    Which of the 22 affinities is going to be dominant?   The Taus are fast and clever, but they lack the killer instinct.  What happens to the people who don’t belong to any affinity?   What happens when one’s loyalty to the group conflicts with that to your actual family?  And what happens when this technology marches on, as they always do?

The characters here are vivid and the plot is engaging, but let me recommend this novel for that most SF of qualities – extrapolation.  The future doesn’t belong to better widgets – to jetpacks and Mars bases and phones that interface directly to your retinal and auditory nerves.   That’s 20th century physical thinking.  The future is mindware, baby; it’s cognitive engineering.   Get a million people working together effectively, and a Mars base is a side-effect.

This entry was posted in Uncategorized and tagged sf-ish. Bookmark the permalink.

1 Response to “The Affinities”: Weaponized Psychology