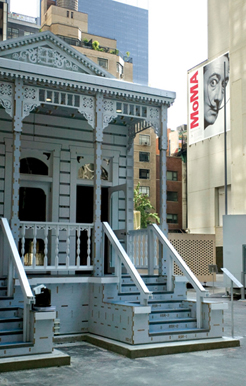 Houses assembled like Ikea furniture.  The little dash marks are slots and tabs that hold it all together.

One of the other talks at MIT’s Technology Day was by Lawrence Sass, an associate professor of architecture at MIT.   He’s been looking at how to get computers directly involved with constructing buildings.   As a test case, he built a New Orleans-style shotgun house entirely out of NC-cut sheets of plywood, as seen to the right.  It was part of a big exhibit at the Museum of Modern Art in New York in 2008 called Home Delivery.  There’s a video of the project here.

He started by photographing a lot of classic houses in New Orleans.  They all have the same basic structure, but vary the front porches.   He turned the photos into 3D models, and then into volumetric renderings of each element like the walls and floors.  He came up with a scheme for building up the elements out of ribs of plywood, and covering them with sheets:

The ribs have small tabs that fit into slots on the sheets of the flooring and walls.

Everything is slotted together instead of being nailed or screwed.  Sass says that the friction bond is actually stronger.

The plywood was cut by big computer-controlled routers made by ShopBot of North Carolina.  These are like the old pen plotters, but hold a router bit that can move in X and Y over a 4×8 sheet of plywood.  They can also move in Z for cutting shallow channels.  It took 18 days to cut the 7000 pieces into 10 pallets worth of plywood. 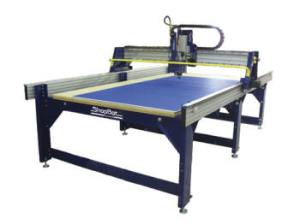 A router like this one can cut 600″ per minute in X and Y.  They make models from industrial sizes down to 24″x32″ desktops.  They also make 5-axis models that can tilt the router bit.  That allows them to cut detail into the sides of objects instead of just the top.  Their founder, Ted Hall, is a prof of neuroscience at Duke, who got into this by being frustrated at the amount of time it took to cut the sheets he needed for building plywood boats.

Sass in the middle, and his students Smithwick and Michaud. Judging by his forearms, Michaud has done construction before.

Anyway, once the pallets were delivered to MoMa, it took about a month for two of Sass’s students to fit all the pieces into place.  They used rubber mallets and the occasional crowbar for extra persuasion.   They only found 5 errors in the cutting!  That’s a low bug rate.

But does this approach really make any sense?   I don’t think it actually takes a month to frame a house.   This structure doesn’t even have roofing or siding.   The framing is only a small part of the work in a modern house compared to the wiring, plumbing, drywall, and painting.  The rib structure of the walls would make it hard to insulate, although it should be good for preventing the spread of fires.

I would say that the detail work is a better use of this NC stuff.  The standardized structure of a house is an already solved problem.  Doing all the fiddly variations that people would want to individualize their houses is the place where the complete flexibility of the NC router can shine.   It can easily handle all the gingerbread seen on that porch.  Modern architecture got away from that kind of fine detail when the Italian craftsmen who carved it in 19th century New York and Boston got too old and too expensive, but maybe NC can bring it  back.

This entry was posted in Uncategorized and tagged mit-ish. Bookmark the permalink.

1 Response to Print Your House