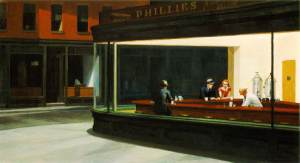 If you’re ever taken out to dinner to a restaurant with fluorescent lighting, you can be pretty sure that your date is an idiot.   That’s the least flattering kind of light known.  Well, maybe it’s not as bad as yellow sodium street lights, but truck yards are not exactly places for romance either.   Fluorescents are heavily blue, which causes skin to look less healthy and shows up blemishes.   If a restaurant uses it, you can be sure that they’re cheap, which also doesn’t speak well for your date.

But fluorescents are the lighting of the future!  Or at least they will be next year in the US, when 100W incandescent bulbs will no longer be sold.  By 2014 even 40W will be illegal.   Everyone else is banning them too; they’re just too inefficient.   Incandescents have had a 130-year run since Edison’s first plant, which is a pretty long for a technology ( E.g. steam locomotives only lasted for 100), but they’re done for.  Unfortunately, fluorescents aren’t that good a replacement: they’re slow to start, hard to dim, not as reliable as claimed, contain mercury, and the light color is poor.

So everyone is working on the next technology after fluorescents, LEDs.

They’re another 30% more efficient, turn on instantly, and last even longer.  They still have a problem, though – they look the same when dimmed as when at full brightness.

This came up at lunch the other day when I was chatting with some fellow EEs.  “What’s wrong with that?” they asked, “Don’t you just want less light when you dim a bulb?”

“Geez, how long have you guys been married?” I should have said but didn’t.  You dim lights for romance!   That works for incandescents because as the light gets dimmer, the filament gets cooler and shifts more towards the red.   That’s sort of an accidental feature, but has prompted the installation of billions of dimmers across the world.

But as LEDs get dimmer they just keep the same color and are on for a lower percentage of time.  Still, even this can be solved!  If the LED contains both blue and red emitters, then the color can be adjusted independently.  A little controller inside the light can detect how much dimmage is being asked for and set the mix of colors accordingly.  It’s also possible to tune the color by adjusting the current.  Firms are working on this right now.

Ultimately they ought to just have a knob on the fixture, with the label “Clear light of truth” on the bluer side and “Attractive light of illusion” on the reddish.    My sensible engineering colleagues won’t see the point of that, but everyone else will.