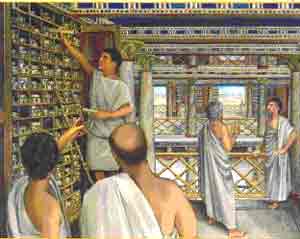 What modern city would match Hypatia‘s Alexandria?  Not in the sense of being filled with murderous mobs, of course, but in terms of being a main repository of knowledge.

My own city, Boston, has some claim.   I was struck by a passage on these lines many years ago in the New Yorker, wherein a professor at Harvard was able to out-analyze the entire US government. The author of the piece, Thomas Whiteside, was writing about the disgraceful Yellow Rain affair in the 80s, where the Reagan administration had claimed that the Vietnamese were using poison gas in Laos.   Hmong tribesmen there had described seeing yellow clouds of something and getting sick thereafter.  Alexander Haig then claimed that the Soviets were supplying chemical weapons to the Vietnamese and that therefore the US had to install them in Germany.  A Harvard prof, Matthew Meselson, was suspicious and ultimately found the real explanation, clouds of pollen emitted when colonies of bees migrated.   Here is Whiteside interviewing him in his Cambridge office:

When I asked Meselson about his subsequent researches, he waved a hand toward the windows of the room we were in – a seminar room near his office – to indicate various buildings across the way.  “You have to realize what this place is like,” he told me.  “Right over there is the Yenching Library, containing the largest collection of Chinese books and journals in the United States; it has several levels underground.  Then over there” – he pointed out a sprawling red brick building of Edwardian appearance – “are the Biological Laboratories, in which you have specialists on the social insects – ants, bees, termites, and so on.  And over here” – gesturing again – “you have the Farlow Museum, which is a laboratory and museum dedicated solely to fungi.  And next to that is the Harvard herbarium, one of the greatest in the world, in which you can find samples of nearly every species of plant that’s known.  And over there” – pointing beyong the herbarium – “you have the Museum of Comparative Zoology, containing insect specimens from all over the world, including Southeast Asia.  And, again, there are the Peabody Museum and the Tozzer Libary, where, if you are interested in the Hmong, you can look up all kinds of naturalists’ books and drawings and field notes about these people. Then over there we have the Department of Chemistry, which has the analytical facilities and the knowledge to undertake the chemical analysis of trichothecenes by mass spectroscopy.  And down by the river there are people, at the John F. Kennedy School, who have connections with the government.  Altogether, I think, you have available a resource that exceeds in intellectual power anything the government itself possesses.

But can we put this kind of thing on a quantitative basis?  What city has the largest number of books?

My first guess would be Washington DC, because of the Library of Congress.   It gets a copy of every book published in the US, and since the US represents 1/4 to  1/3 of the population of the developed world (300M out of about 900 to 1200M depending on what countries you count), that’s likely to make it easily the largest library in the world.

It turns out that the American Library Association maintains a list of the 100 largest libraries in the country here.  If we group libraries in metro areas together, the largest look like this:

The ALA defines a volume as a work that can be checked out as a single item for the academic libraries, and as a cataloged work for the public libraries.  These aren’t quite comparable, and that probably makes the public libraries look larger, but are similar enough for this rough estimate.

These are about the cities that you would expect – the leading creative cities of the US.  The spread in the total size of the libraries in each city is not all that large, from 46M to 20M.  There are many other cities in the 5M to 20M range, including all the major universities.  Boston is only unusual in that it has the largest number of books and is also the smallest of the metropolitan regions listed.

The major foreign libraries are a bit harder to track, but here are a few:

Special mention should also be made of the actual current Library of Alexandria, the Bibliotecha Alexandrina, which only opened in 2002. So far it’s only up to 0.6M volumes, but the building is spectacular and it’s getting huge use.

But is all this beside the point?  Surely the Internet itself is the modern Alexandria, not all these piles of dead trees (a phrase I personally detest).   Surely the collaborative powers of the Web would make a job like Meselson’s far easier today than it was in the 1980s.  Who needs to wander from lab to lab at Harvard when one could just Google for bees and trichothecene?

Maybe so.  However, the prestige of the leading academic centers appears to be on the rise, not in decline.   Acceptance rates at the Ivies are going down, not up. MIT has put all its course notes online, yet the demand for it keeps going up.

Historians will consider this a dark age. Science historians can read Galileo’s technical correspondence from the 1590s but not Marvin Minsky’s from the 1960s.

It’s true for me personally – I have all my notebooks and journals dating back to the 1970s, but have lost almost all my email from the 80s and 90s.

The key thing, though, about the above statistics and the existence of the Web is that there is not one Alexandria.  There is not one place that can be burned by zealots, thus destroying the knowledge they don’t like.   There are hundreds of places around the world with million-book libraries, and now hundreds of thousands of copies of Wikipedia.    Hypatia wrote in one place on a few dozen scrolls, and so it was easy to destroy her life’s work.  The totalitarian monsters of the 20th century also tried to destroy the works of their enemies, but they failed then and will fail in the future.   There isn’t really a single modern Alexandria – there are Alexandrias everywhere.

This entry was posted in Uncategorized and tagged hypatia, tech-culture. Bookmark the permalink.

2 Responses to The Modern Alexandria?