Noble Effort to Save Planet, or Death Ray?

So I’m reading about the Sierra solar power tower installation in Lancaster CA. That’s in the south central part of the state, about 40 miles north of LA.  The system produces 5 MW peak from two 50m towers and 24,000 mirrors, each about 1 x 2 meters.  It just turned on in August, and is the first system from a Google-backed startup, eSolar. 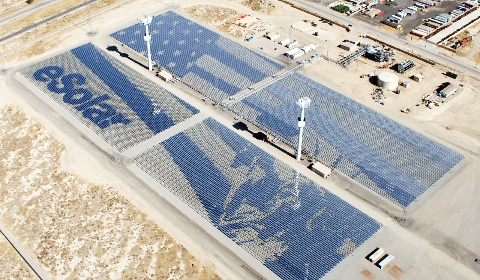 Power towers are an old idea, but the novel thing about this system is that the mirrors are just cheap, flat plates that can still get a good concentration of light by using individual tracking and control. Each mirror guides itself in reflecting the sun onto the boiler in the tower.  That lets the mirrors adjust for all kinds of random variations: wind loads, changes in the Sun’s position due to atmospheric refraction, and sloppy installation.  So they’re replacing expensive optical components with cheap electronics.  This wins because electronics gets cheaper faster than anything else.

Oh, and they’re also replacing expensive American labor in assembling them with cheap Chinese workers.  They’re made over there and installed here, probably by immigrants making $10 an hour.  You can’t blame eSolar for doing things this way, but it does call into question all the claims about green jobs.

But that’s not what caught my eye about this.  Sure, clean energy is nice, and global labor issues are always good for verbiage, but what this system really reminded me of is the sunflower fields of  “Ringworld”.  In it, Larry Niven postulated a plant with a shiny parabolic leaf and a green bulb at the focus.  Not only can it handle dimmer light, but by moving its reflector it can fry its enemies, especially when a million of them work in concert.

So if this power tower system was hacked by hostiles, over what range could it fry something?  The Air Force has a project, the Joint High Power Solid State Laser, which aims for a power density of 100 kW/m2.  Over what distance could this array produce that?  Let’s see:

the width of a beam of sunlight gets 10 meters wider for every 1000 meters of distance.

So this system could fry things that were about a mile above it. That’s probably an unreachable upper bound.  The mirrors won’t be perfect, the sunshine isn’t always that bright, the target won’t be directly between the sun and the mirrors, etc.  Still, that could take out some low-flying aircraft.  Edwards Air Force Base is right next door, and that’s where the Shuttle lands…

This entry was posted in Uncategorized and tagged energy-ish, sf-ish. Bookmark the permalink.